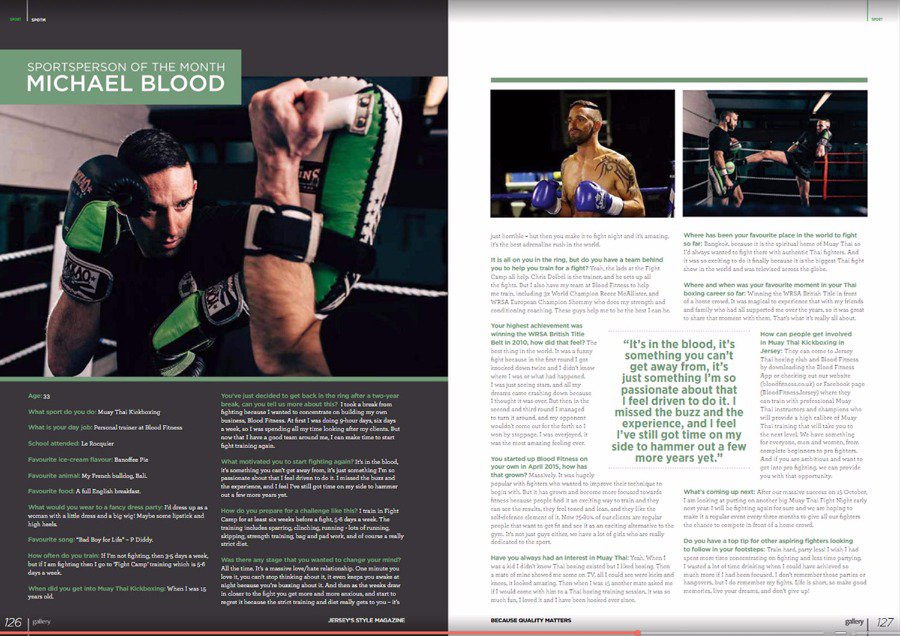 What sport do you do: Muay Thai Kickboxing

What is your day job: Personal Trainer at Blood Fitness

What would you wear to a fancy dress party: I’d dress up as a woman with a little dress and a big wig! Maybe some lipstick and high heels.

How often do you train: If I’m not fighting, then 3-5 days a week, but if I am fighting then I go to ‘Fight Camp’ training which is 5-6 days a week.

When did you get into Muay Thai Kickboxing: When I was 15 years old.

You’ve just decided to get back in the ring after a two-year break, can you tell us more about this?  I took a break from fighting because I wanted to concentrate on building my own business, Blood Fitness. At first I was doing 9-hour days, 6 days a week, so I was spending all my time looking after my clients. But now that I have a good team around me, I can make time to start fight training again.

What motivated you to start fighting again? It’s in the blood, it’s something you can’t get away from, it’s just something I’m so passionate about that I feel driven to do it. I missed the buzz and the experience, and I feel I’ve still got time on my side to hammer out a few more years yet.

How do you prepare for a challenge like this? I train in Fight Camp for at least 6 weeks before a fight, 5-6 days a week. The training includes sparring, clinching, running - lots of running - skipping, strength training, bag and pad work, and of course a really strict diet.

Was there any stage that you wanted to change your mind? All the time. It’s a massive love/hate relationship. One minute you love it, you can’t stop thinking about it, it even keeps you awake at night because you’re buzzing about it. And then as the weeks draw in closer to the fight you get more and more anxious, and start to regret it because the strict training and diet really gets to you – it’s just horrible – but then you make it to fight night and it’s amazing, it’s the best adrenaline rush in the world.

It is all on you in the ring, but do you have a team behind you to help you train for a fight? Yeah, the lads at the Fight Camp all help. Chris Dolbel is the trainer, and he sets up all the fights. But I also have my team at Blood Fitness to help me train, including 3x World Champion Reece McAllister, and WRSA European Champion Shemmy who does my strength and conditioning coaching. These guys help me to be the best I can be.

Your highest achievement was winning the WRSA British Title Belt in 2010, how did that feel? The best thing in the world. It was a funny fight because in the first round I got knocked down twice and I didn’t know where I was or what had happened. I was just seeing stars, and all my dreams came crashing down because I thought it was over. But then in the second and third round I managed to turn it around, and my opponent wouldn’t come out for the forth so I won by stoppage. I was overjoyed, it was the most amazing feeling ever.

You started up Blood Fitness on your own in April 2015, how has that grown? Massively. It was hugely popular with fighters who wanted to improve their technique to begin with. But it has grown and become more focused towards fitness because people find it an exciting way to train and they can see the results, they feel toned and lean, and they like the self-defence element of it. Now 75-80% of our clients are regular people that want to get fit and see it as an exciting alternative to the gym. It’s not just guys either, we have a lot of girls who are really dedicated to the sport.

Have you always had an interest in Muay Thai: Yeah. When I was a kid I didn’t know Thai Boxing existed but I liked Boxing. Then a mate of mine showed me some on TV, all I could see were kicks and knees, it looked amazing. Then when I was 15 another mate asked me if I would come with him to a Thai Boxing training session, it was so much fun, I loved it and I have been hooked ever since.

Where and when was your favourite moment in your Thai boxing career so far: Winning the WRSA British Title in front of the home crowd. It was magical to experience that with my friends and family who had all supported me over the years, so it was great to share that moment with them. That’s what it’s really all about.

How can people get involved in Muay Thai Kickboxing in Jersey: They can come to Jersey Thai boxing club and Blood Fitness by downloading the Blood Fitness App or checking out our website (bloodfitness.co.uk) or Facebook page (facebook.com/BloodFitnessJersey) where they can train with professional Muay Thai instructors and champions who will provide a high calibre of Muay Thai training that will take you to the next level. We have something for everyone, men and women, from complete beginners to pro fighters. And if you are ambitious and want to get into pro fighting, we can provide you with that opportunity.

What’s coming up next: After our massive success on 15th October, I am looking at putting on another big Muay Thai Fight Night early next year. I will be fighting again for sure. And we are hoping to make it a regular event every three months to give all our fighters the chance to compete in front of a home crowd.

Do you have a top tip for other aspiring fighters looking to follow in your footsteps:  Train hard, party less! I wish I had spent more time concentrating on fighting and less time partying, I wasted a lot of time drinking when I could have achieved so much more if I had been focused. I don’t remember those parties or hangovers, but I do remember my fights. Life is short, so make good memories, live your dreams, and don’t give up!